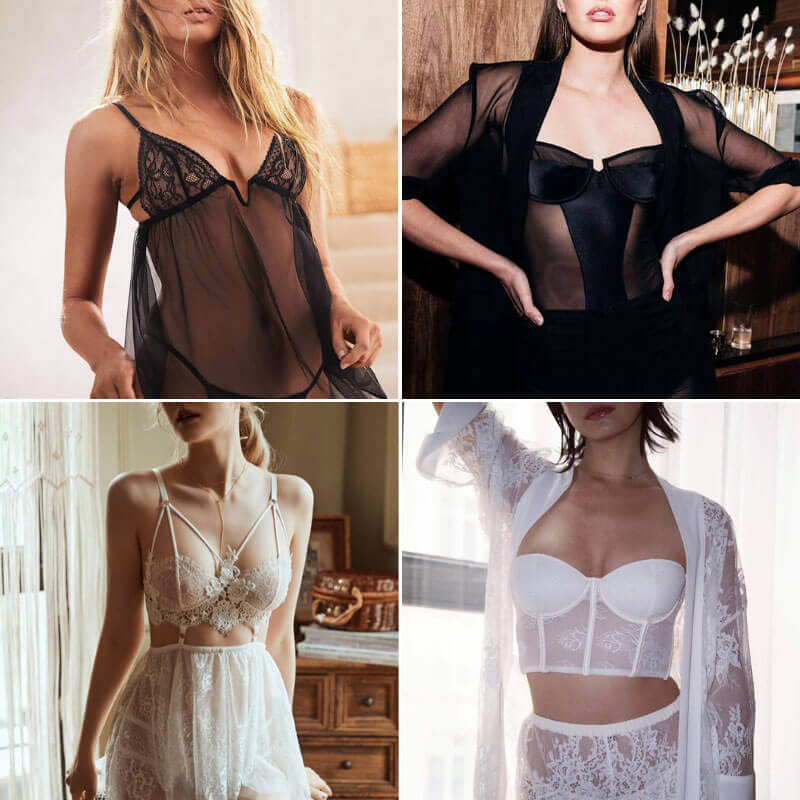 “I think the meaning of sexy is something is attractive and also elegant at the same time, which can make you more confident.”

This quote from Elle Magazine’s international survey of fashion editors, about the role that lingerie can play in our everyday lives—making us feel at once desired by others, and desirable in our own right—feels pretty typical for most American women. The source of the quote, however? Pony Ma, fashion editor for the magazine’s Chinese edition.

When it comes down to it, the fundamental purposes that lingerie serve —beauty, comfort, support, and confidence—differ little across the world. With that said, the trends and the lifestyles they accent can differ a bit depending on who you are and where you live. And, in a lot of ways, those differences can be mapped (literally!) to the purpose the lingerie serves whether that’s function, form, or fashion.

To prove this, we’ll take a walk through history to watch the evolution of lingerie, and pair the evolution with the purpose they serve in countries around the world.

As is the case with so many things, early evidence of what we would now recognize as bras surfaced in the relics of ancient Greece and Rome. It was discovered in Greece first, as bands of fabric (generally wool) that were wrapped tightly across a woman’s front and secured with pins in the back. Similar garments were found in ancient Rome, called “fascia” or “mamillare,” and were generally worn during athletic events or while dancing.

In both Greece and Rome,  these garments were all about support. They were designed to serve one purpose: prevent breasts from getting injured or in the way during everyday tasks. In a sense, then, they could be considered the earliest prototypes for what we now know as active wear!

The first “sports bra” wasn’t introduced to the market until 1977—it was called the Jogbra, and was a Frankensteinian marriage of two jockstraps. These garments of Greek and Roman history were nothing more than rudimentary versions of this concept, preventing injury while living an active life.

This mindset has echoed through the years to influence the lingerie decisions of women in active cultures like Australia, Canada, and even parts of the United States. Genevra Leek of Australia, a country known for its outdoorsy and adventurous lifestyle, actively seeks out “practical, fuss-free pieces and a great selection of active wear.”

Canada has a similar reputation, and is newly adjusting to mass-produced sexy lingerie options like Victoria’s Secret. Their preferences—cotton, feminine colors, construction that adds little padding—are simple, worrying far more about what they can do instead of how they look.

Once we had fulfilled our societal desire to create undergarments for function, designing undergarments for form started to come into play. During China’s Ming Dynasty, the du dou — a biblike garment with straps that fastened in the back to bind the breasts, was introduced.

Meanwhile, in the West, corsets were coming into fashion to accentuate the breasts—a novel notion at the time—but also in order to define a desirable hourglass figure for women. Made with ribs comprised of many different types of materials (including wood, metal, and sometimes even animal bones such as whalebone), they were dedicated to protecting posture—even, at times, at the expense of proper breathing!

Some may classify the du dou and the corset as further binding instruments, but they were a departure from their Greek and Roman predecessors for a key reason. Whereas the Greek wool bands and the Roman fascia were worn for functional reasons, the du dou and corset were designed for form.

In some ways, they had their own style; in fact, some du dou still exist in China to be worn as outerwear- there are bustiers and corsets that are designed to be worn as tops as well. In those earlier days, they were made to facilitate the wearing of ornate and complicated outerwear, a more intricate relative to the chemise (worn to protect outerwear from body soil and sweat). But, unlike the shapeless chemise, these structured undergarments were meant to alter the body to make it more pleasing to the eye, and to attract suitors.

This view of lingerie—as a garment or set of garments worn to please one’s companion—persists in Asian countries like China and South Korea. Pony Ma spoke at the opening about lingerie providing confidence as well as a sexy look; she elaborated further to say that there are definite trends in lingerie designed to please sexual partners. Black, lace, silky fabrics, and padding are all incredibly common in crafting a sexy look for Chinese women. South Korea holds sexy lingerie in incredibly high regard as a part of the wedding ritual. Anticipation of the wedding night is quite high in Korean culture, and finding the perfect lingerie for that night is a rite of passage in its own right.

After emphasizing form, and then function, lingerie made further evolution into the realm of fashion. Experimentation with varying styles, colors, and venturing out from underneath clothing and onto runways has created a whole new life for lingerie.

1914 marked the design and eventual patent for the very first commercially available bra by Mary Phelps Jacob, designed to lift and separate breasts in a way that prior apparatuses didn’t (hence, the fashionable “monobosom” look that just preceded Jacob’s creation).

Then, in 1947, Frederick Mellinger developed the push-up bra, as well as thong underwear in the 1980s. He popularized both through sales in his namesake boutiques, the now-defunct Frederick’s of Hollywood. Here, you find lingerie that merged the prior two purposes of form and function, and made both the garments and the women wearing them fashionable.

Embracing lingerie as fashion has been, from a design perspective, a relatively American pursuit, but is also highly popular in Europe, Africa, and Latin America. In particular, countries like Slovenia, Serbia, and Italy are embracing texture and color.

White is the most popular lingerie color worldwide, with the next most popular being (interestingly) lilac, blue, and purple. As we’ve mentioned, the more fashion-forward of Chinese women favor black. But, in Serbia, deep colors like bordeaux and red are favored. Italy echoes the favoring of red, with women wearing red lingerie on New Years’ Eve, in hopes of attracting good luck for the year ahead.

More recently, Nigerian designers are starting to design fashionable lingerie, proving that designers and fashionistas all over the world “identify with every woman’s desire to find undergarments that fit comfortably and make her feel incredibly beautiful.”

If availability flags, the increasing number of retailers allows countries like Mexico to choose from several online, catalog, and order-by-phone options. And yet, for all the progress that lingerie has made—from purely functional, to a tool of form, and finally as an expression of fashion—there’s still more to the story. And it’s on its way.

Historically, lingerie as a fashion statement has been something that Westerners, traditionally thin and stereotypically pretty, get to take part in. Women in Romania were vocal about this standard, even naming Brazil as a specific culture that influenced such a perception; women from Brazil did agree with that assessment.

Even as products garner demand across the globe (women in the United Kingdom reportedly have the largest average bra size in the world, with Japanese women across the spectrum wearing the smallest size on average), models have remained small, thin, and yet somehow improbably busty. But that paradigm is being shifted in a few key ways.

First, sexy and aesthetically pleasing lingerie is becoming increasingly available in larger sizes. Despite claimed limitations in design, production, and cost, availability of bras, panties, and boudoir attire for plus sized women is improving. Moreover, it’s getting prettier. Long relegated to drab white or nude-colored utilitarian items, an array of fashionable plus sized lingerie options are now generally available on racks and shelves.

Whether you’re seeking something special for a wedding night, or a good everyday bra that can get you through a long work day comfortably, it’s important to have choices available. Women in New Zealand have expressed joy at this development, indicating that the need for these options is not a uniquely American one.

Somewhat related to this is the idea of lingerie for all sorts of breasts. In the past several years, lingerie has started to be fitted and designed specifically for individuals who have undergone mastectomies, implants, and other top surgeries. This is a welcome development for all those who identify lingerie with femininity. This can include breast cancer survivors and women who have had breasts removed, as well as those identifying as female, genderqueer, or who are transitioning into a female identity.

The ability to make buying and wearing lingerie an inclusive experience is a relatively new need, but one that manufacturers and retailers are thankfully paying close attention to. And inclusivity has even been extended to the term “nude,” as lingerie designers and retailers start to create a spectrum of shades to encompass the many colors in which their customers may come.

And, far more recently, a statement about lingerie has been made in Islamic nations. In 2012, a landmark piece of legislation passed in Saudi Arabia gave women the legal right to work in lingerie shops. Prior to that time, only men could work in those shops. To understand the magnitude of such a milestone, consider this statement from Lingerie Talk: “It’s easy to forget that, in many parts of the world, fashion and politics are inseparable. To ignore that truth is not just insensitive, but potentially dangerous.”

An element of that danger is starting to change, and it’s wonderful news for Muslim women. Nearly 80% of women are wearing the wrong bra size, which can lead to a host of muscular and posture-related problems. With the ability to help one another navigate bra sizing, try on samples, and purchase lingerie, a culture of support can develop between women to find their best fit.

And, lest you believe that having pleasing lingerie wouldn’t matter in these cultures, Alia Hogben of the Canadian Council for Muslim Women says otherwise:

Just because women cover up in public on the street doesn’t mean that they don’t dress up spectacularly underneath those clothes. The philosophy is that women are not out there for the world to look at them, so they don’t dress for the general public. But for their family and friends, they dress beautifully. They have magnificent hairstyles, they wear magnificent jewelry and they love lingerie.

As companies begin to identify markets where growth can take place, the Middle East will no doubt continue to be a market to watch, as more Muslim women are afforded the opportunity to explore this side of themselves among other women.

While it may seem as though styles would vary widely across cultures, this journey—through history and across the globe—has proven that we are far more alike than we are different when it comes to what we wear underneath our clothes. What we do in them, what color we buy them in, and how we access them is all a little different, depending on where we are.

But, ultimately, we land right back where we started, with Pony Ma’s quote about how properly fitted and aesthetically pleasing lingerie makes us feel: “I think the meaning of sexy is something is attractive and also elegant at the same time, which can make you more confident.”