Top 10 Tips for Initiating Sex with Your Husband 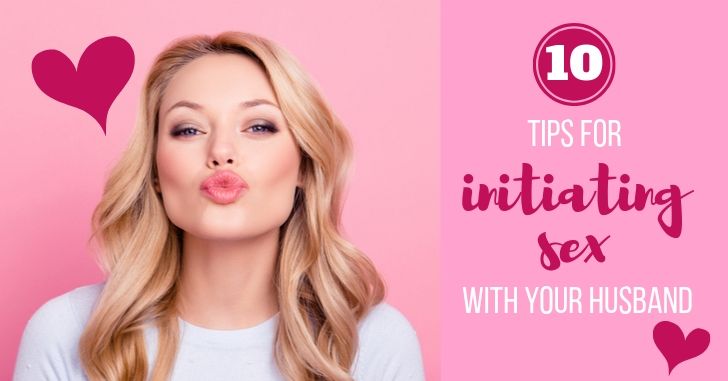 01 Mar Top 10 Tips for Initiating Sex with Your Husband

Out of the last five times you’ve made love, how many have you initiated sex, and how many has your husband initiated?

If you say he’s initiated all 5, that could be a problem!

Now, I know sometimes you just start making love because you’re kissing and snuggling, and it’s not clear WHO initiated. It just happened (all the more reason to go to bed at the same time, so that things can “just happen”!). And sometimes he has a really low sex drive, and so the whole initiation pattern is thrown off.

But quite often we get into this rut where he wants sex more than you do, and so he’s the one who always initiates making love. And you’re not even sure how to initiate sex with him, because you’ve never really done it!

But what if you’re just not comfortable initiating? Well, here’s 10 tips on how to initiate sex with your husband – and help your husband feel like the most blessed man in the world!

Initiating sex requires enthusiasm–and I know that can feel awkward. But when we try to initiate without enthusiasm it comes off as rather off-putting. The following, for instance, do NOT count as initiating sex:

If you’re going to initiate, the first step is NOT telling him “do you wanna?” The first step is getting in the right frame of mind for sex so that you’re enthusiastic about it, too!

But here’s just a heads up for the guys reading this: sometimes when women cross their arms and say, “we can if you wanna”, it’s not because they’re just doing this out of duty and they don’t really want to. It might honestly be because they just feel so awkward that they’re tensing up. So don’t interpret it as always “duty sex”!

Why don’t we initiate sex? Because often as soon as the thought pops into our heads we talk ourselves out of it.

Do I want to tonight? Well, I don’t know. It is kind of late, and I do need my sleep. And he wasn’t very nice to me tonight. He hardly hugged me when he came home from work. I just feel so distant right now. I can’t make love if we’re distant, can I? Wouldn’t that be deceptive? And what if the kids wake up? And what if….

Why don’t we initiate more? Because all these thoughts stop us!

So turn it off! Seriously. When you get the thought, pounce on it (and pounce on HIM, too!) Start kissing him. Let your hands wander pretty much immediately (seriously–women don’t like guys to GO FOR IT right away, so we often assume men need the lead up, too. They don’t. Just zero in!). Don’t second guess yourself. You’ll be happier later–and you’ll likely sleep better, too!

Did you grow up thinking that? If you grew up thinking that only boys wanted sex, and girls just acquiesced, then you may think that it’s your role to sit back and just respond to him. Anything else somehow upsets the apple cart. That seems to be what our first letter writer is experiencing.

But good girls DO want sex! God gave us sex drives, too. And inside marriage sex is supposed to be a wonderful thing for both of you! Think about it this way: This is the only man on earth who can touch you like that. He’s the only man on earth who really truly knows you. You don’t need to be embarrassed around him. I know that can be a hard transition to make. But practice little things, like saying to him the morning after you made love, “I had fun last night”, or “you made me feel great!” Practice talking about it afterwards, and it makes it easier to talk about it beforehand! So saunter up to him and whisper in his ear, “do you want me to drive you crazy tonight?” He’ll get the message.

4. DON’T Beat Around the Bush

But remember: If you’re too embarrassed to be that direct, or if you’re embarrassed about saying, “do you want to make love tonight?”, then you may not give clear enough signals.

My husband was leaving for a business trip for a week recently, and he was spending the morning before he was picked up sorting papers and paying bills and getting some tasks done around the house. I kept getting up from my computer whenever he got up from his and walking over and seeing if I could get him interested in something, but I never let him know what I was doing. I thought he was just busy and wasn’t interested. But after following him around like a puppy dog for an hour, he finally turned to me and said, “are you okay?”, and I said, “I just thought we could go upstairs for some fun before you left.”

He jumped on board immediately!

I had thought he was busy and was rejecting me, but he just really didn’t know what I was getting at. Men are usually afraid of getting rejected, and if he tends to have the higher sex drive in your marriage, he may have conditioned himself to never think about it, or to try not to assume you’re going somewhere, because he doesn’t want to get his hopes up. Subtlety, then, isn’t a good thing. Be obvious. It’s easier on everyone!

5. DO Use Your Hands

Don’t like talking about sex? Feel super awkward trying to say something sexy to start?

You don’t have to. Come up behind him, wrap your arms around him, start nibbling his ear, and let your hands wander. Watching a movie? Rest your hand in a creative place. And again–don’t beat around the bush. Put your hand EXACTLY where you know he wants it. Or lead him to the bedroom–but not with HIS hand. You can get things going without saying any words, if the words make you shy. Just do it!

Initiating sex can start earlier in the day. You can text him at work (“You’re in for it tonight!”). You can get dressed in your “pretty” underwear (not your functional underwear), and let him see, and say something like, “so this is what I’ll be wearing all day today…. If a thought occurs to you, do it! Chances are it’s a good thought, and most guys won’t laugh at you. They’ll definitely go with it!

It’s okay to smile, and chuckle, and be giggly. It’s okay to act like teenagers. It doesn’t have to be super serious. You can joke around. “Hey, Big Man, do you have anything to help Little Ole Me?” You can flirt with your husband! It really is okay. And the more laughter, the more fun all around.

Is flirting still a little bit awkward? Then try this instead!

Put aside the flannel pajamas or ugly T-shirts, get into some silk ones. Or put on a matching bra and panty set and as you get undressed, show him what you’re wearing. Or go naked underneath a bathrobe and “flash” him while he’s downstairs. Then walk away, and see if he follows.

If you’ve been texting him all day, or you whispered in his ear when he walked in the door, then follow through. It’s hard on a guy to get his engines revving and then stopping with no warning.

Obviously if something comes up you may have to forego sex that evening, but if you’ve been hinting, then as much as possible, set the right conditions. Don’t watch a chick flick if it’s likely to make you so tired that at the end of it you want to collapse into bed. It may seem romantic, but if it will push bedtime back too far, then make love FIRST, before the movie. Don’t get on the computer thinking, “after I’m done this we’ll head upstairs.” If sex is your plan, then make sure it happens early, when you’re still thinking about it, rather than giving other things–the news, the computer, the movies–a chance to distract you and make you change your mind.

Once you’ve caught his attention, and you’re heading to the bedroom, don’t let the initiation end. Be active as you make love. Touch him. Guide his hand. Be the aggressor–at least a little bit. Find a good position yourself. Get on top even! When you’re active, it shows him, “I want to do this.” If you lie there on your back and don’t do much, he may think, “she’s just doing this for me.” Show him you are interested, and you do want this to happen–by making it happen!

So there you go–a bunch of tips for making initiating sex more natural and less awkward.

Sex doesn’t need to be awkward, but I know that it is for so many (and it was for me, too!). But don’t overthink it. Tell yourself good things about sex, and your husband! Small changes now can add up to big changes in the long run. Now go and have a great time with your man!